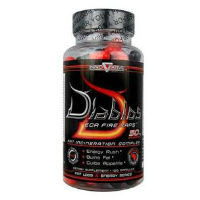 Diablos ECA is a nonprescription supplement product that has been designed as a fat burner meant for athletes and bodybuilders. The purpose of this product isn’t necessarily to give dieters a way to lose weight. Instead, it is meant to give bodybuilders the chance to reduce their fat levels so that the muscles they have been building will be more visible and defined.

This particularly pill is very powerful and is not meant for people who are simply trying to ease into using supplements for the first time. It contains a massive amount of stimulants and thermogenics, to the degree that many people will experience side effects if they are sensitive to this type of ingredient or if they are not adequately built and ready to work out when they take them.

It is highly recommended that anyone who is considering the use of Diablos ECA go and speak with a doctor, first. This is because it is not considered to be safe or appropriate for everyone. It could not only cause side effects for many people but it could also result in some increased health risks for people who have certain common medical conditions.

It should also be noted that the Diablos company behind this product has not been without its controversy and even some legal issues. In March 2015, the FDA released a Public Notification about the Diablos ECA capsules due to the fact that they contained hidden ingredients that were not listed on the package. In fact, these weren’t just simple substances that were not found on the product ingredients list. According to the Public Notification, following an analysis of the product, it was determined that these capsules also contained: “sildenafil, phenolphthalein, sibutramine and an analogue of sibutramine, deisobutylbenzylsibutramine.”

This means that one of the unlisted ingredients (sildenafil) in this product were actually prescription medications that were illegally included in a nonprescription product. Phenolphthalein isn’t an active ingredient, but some studies have suggested that it has cancer causing properties. Sibutramine used to be a prescription drug but is now considered to be a controlled substance because it was taken off the market in October 2010 due to safety reasons, including that it can be dangerous or even fatal for some people to take.

All this considered, it doesn’t make it look as though Diablos ECA would be the safest possible choice, particularly as the company has a history of including dangerous ingredients that are not listed on the package. Without a laboratory, there is no way for a consumer to know what he or she is taking.