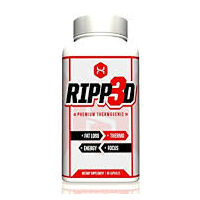 RIPP3D is an over the counter supplement that is geared toward dieters to some degree, but is mostly focused on bodybuilders who need a fat burner to help them to be able to reduce the layer of fat covering up their muscles. Like many other products within this industry, the manufacturer for this product claims that it is the ultimate fat burner. If someone were ever to count the number of products that are advertised with that name, it would likely total in the thousands.

That said, this doesn’t mean that this particular product doesn’t work. Instead of simply assuming that it is similar to everything else because it is marketed in the same way, it is a very good idea to have a closer look so that it can be better understood for what it truly is. That process should begin with a trip to the doctor’s office as that is often the best resource for determining not only if a product is likely to be safe and effective, but also for deciding whether or not it is likely to be appropriate for you to use.

RIPP3D is supposed to function by way of an increase of the thermogenesis in the body. This means that it is in the very large category of diet pills that is meant to work by raising the body temperature. Because fuel is needed in order to produce body heat, it means that raising the body temperature will cause it to burn through more calories and stored fats. That said, just because more calories and fats are burned, it doesn’t mean that the effect is necessarily strong enough to result in measurable fat loss. Therefore, you must take an even closer look before deciding on this product.

By this list, several things become rapidly clear. The first is that this product is based primarily on stimulants. Moreover, the stimulants in this formula are quite powerful and are not necessarily considered to be compatible with each other. The FDA has released a warning to dieters to avoid products containing a combination of caffeine and citrus aurantium – the first two ingredients in this formulation – due to the increased risk of heart attack and stroke that is associated with their use.