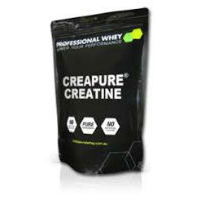 CreaPure Creatine is a supplement geared toward bodybuilders in order to help to boost lean muscle mass. This supplement is made out of 100 percent creatine monohydrate.

It is important to note that while creatine is very commonly used for the purposes described by the manufacturer, clinical research has never actually proven that this substance does anything at all for muscle growth. Instead, what it might be able to provide a bodybuilder is a temporary increase in energy level which could help to raise the amount of weight that can be lifted and could extend the number of sets or repetitions that can be accomplished.

It is in this way that creatine may be able to help a bodybuilder to be able to increase muscle mass. Simply taking CreaPure Creatine will likely not have any impact on the size of the muscles. The only time that it will help to make an improvement is if the user pushes harder in the workout.

According to the official website, the only ingredient in this product is creatine monohydrate.

When looking at the “contact us” and “manufacturer” section of the official website, it looks as though the Creapure brand is owned by a company in Germany called AlChem AG. That company has owned the trademark for the brand since 1997. At that time, the company ran under another name. It finally was founded as AlChem AG in 2006, following a number of mergers of other companies that produced this large organization.

According to many professional reviews of this product, it looks as though it actually contains more creatine than is actually necessary. Studies have shown that there is a maximum level of storage of this substance within the muscles. As the body already produces creatine even without supplementation, the supplements are designed only to top it off to enhance performance as much as possible. However, the dose of this ingredient is very high within this product. Anything that cannot be absorbed by the muscles is essentially passed through the body in a useless way. This indicates that much of the product is actually a waste and that a high quality, lower dose, and lower priced alternative may be a better option for some bodybuilders.

It is important for CreaPure Creatine to be taken only after a workout, for example, with a post-workout shake. Taking it beforehand can cause muscles to dehydrate and could reduce performance.