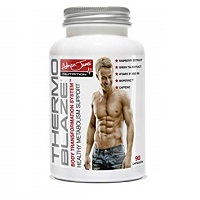 Adrian James Nutrition Thermoblaze is a non-prescription weight loss product developed to act as a fat burner. It is meant to be used for targeting stubborn body fat while improving body tone at the same time. This formula contains all-natural ingredients chosen for their effects on the metabolism, increasing it in order to make sure users can get the most out of their workouts and get fast and safe results.

Thermoblaze is not meant to replace the components of a healthy lifestyle such as eating a nutritious diet or exercising regularly. Instead, it was developed to be a complement and a supplement to those habits. In this way, it is meant to help users to be able to work toward the body they want so they can achieve it “in record time”.

The ingredients in Thermoblaze were chosen because they contain thermogenic properties. That said, it doesn’t specifically state whether or not there have ever been studies on the product to show that these thermogenic properties are powerful enough to produce measureable results in users.

This brings us to another important issue, regarding potential problems between ingredients. In this case, there could be a potential issue among three of the ingredients. The FDA has cautioned American consumers against the use of products containing both synephrine and caffeine. While caffeine is typically believed to be a safe substance for people to use within certain amounts – it is the same stimulant found in coffee – the FDA’s warning placed the spotlight on the combination between caffeine and synephrine which can increase a user’s risk of serious heart issues, including stroke or heart attack.

That said, both of these ingredients are contained within this formula. Citrus aurantium powder contains synephrine, and both caffeine anhydrous and guarana seed extract contain caffeine.

As a result, it is highly recommended that anyone considering the use of this product first speak with a licensed physician. It could conflict with a number of medications, medical conditions, supplements and even certain foods and drinks. It is not appropriate for all dieters.