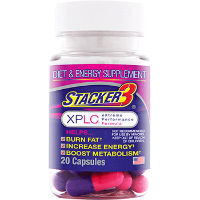 Stacker 3 XPLC is a type of thermogenic over the counter supplement that is sold online by several different retailers, but upon conducting the research for this review, it became apparent that this name doesn’t refer to a single product, but instead refers to at least two formulations. There appear to be two completely separate formulations currently being sold under the exact same and packaging.

This makes the product quite challenging to review and will mean that anyone considering the use of these diet pills will need to ensure that they take care to select the version of the Stacker 3 XPLC formula that they were hoping to obtain. This makes it particularly important for dieters to speak with their doctors before using this product, as this step is typically helpful but it becomes especially important when there are two different formulas with which to contend.

To start, when looking at Stacker 3 as a brand, dieters should be aware that their track history with the FDA has had some weak points. This brand is manufactured by N.V.E. Pharmaceuticals, Inc., a company located in New Jersey. Both the company and the product were faced with issues with the FDA in 2013 at which time their manufacturing procedures and the facility itself were determined to be in “serious” violation of cGMP (the Current Good Manufacturing Practice) regulations for the production of supplement products.

Furthermore, Robert Occhifinto is the owner of that manufacturer. He is among the company owners who were fighting against the ban of ephedra in 2004 under the claim that the FDA could not provide adequate proof that this was a dangerous ingredient provided that it was used as directed. This, regardless of the fact that there had been approximately 16,000 adverse reactions reported and a study commissioned by the U.S. government determined that it acts in a similar way to the adrenaline-like stimulant which increases the risk of stroke, heart attack and death.

This suggests that the company may – at least at one time – have been focused more on ensuring that its products contained cheap and popular ingredients than it was on making every precaution that its ingredients are safe for users and that the products are manufactured in the best possible way for high quality and safety of use.

That said, the version sold on Amazon and on the official website for the product contained: chromium, yerba mate, camellia sinensis (green tea), taurine, and yohimbine alkaloids.