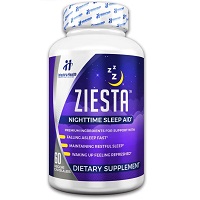 Melatonin is a hormone produced naturally by the body, but it is also used medicinally in a synthetic form.  It is easily available in supplements both on its own and in combinations with other ingredients.

How Does Melatonin Work?

Many people take melatonin orally in the form of pills or dissolving strips to help them to adjust the body’s sleeping and waking clock – the circadian rhythm.  It is frequently used to help improve sleep among people suffering from insomnia, or who need to adjust their sleep patterns due to issues such as shift work or jet lag.

This is because melatonin’s main purpose in the human body is to regulate the circadian rhythm.  It signals to the body that daytime has ended, and that nighttime is here, so it’s time to sleep.  There are many issues that can impact natural melatonin production in the body. Light exposure is a major one.  Too much light exposure decreases the body’s melatonin production and its associated signals that tell the body to prepare for bedtime. As a result, we remain awake. Some research has shown that it’s common for people who struggle with sleep to have low levels of this hormone. It has therefore been speculated that supplements containing this ingredient can help those individuals.

Does It Work to Make You Sleep?

Should you be looking for the best sleep supplement with melatonin? Is there science behind the claims?

Research has shown that melatonin can be quite helpful for easing the struggles of people who are trying to fall asleep at a conventional bedtime – a common issue called delayed sleep phase syndrome. Taking this substance orally has shown to be helpful in reducing the time adults require to fall asleep.  That said, if it is taken consistently for a year, the sleeping struggle may return.

Studies have also shown that melatonin can be helpful in reducing the sleep disturbances experienced by some adults during the night. Doctors have effectively treated patients with certain conditions or using certain medications such as beta-blockers which sometimes reduce a patient’s melatonin levels. By replacing those levels with supplements, the sleeping problems appeared to have been improved.

Research has also indicated that taking this hormone for 8 weeks can help to reduce some of the pain and use of painkillers among women suffering from endometriosis. It can also help to reduce menstrual pain and the pain from defecating or intercourse during menstruation.

Aside from that, studies have shown that it can be helpful in reducing the amount of time it takes to fall asleep for people suffering from insomnia and jet lag. It may also help to reduce the risk of migraines, pre-surgery anxiety and the pain from temporomandibular disorders (TMD).

Melatonin is typically safe when taken orally in reasonable amounts to help support better sleep.  That said, it’s not appropriate for everyone. Before using supplements with this ingredient to treat a condition or if you are pregnant, nursing or have a medical condition such as a bleeding disorder, speak with your doctor to ensure it will be safe for you.