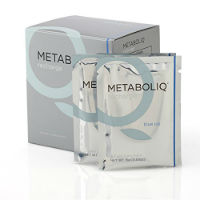 Qivana Metaboliq Recharge is one of three products that make up the complete Metaboliq system. According to the webpage for this product on the manufacturer’s official website, the entire Metaboliq system was formulated by Dr. Donald K. Layman.

Dr. Layman is described as a medical expert whose research has been recognized by the American Society for Nutritional Sciences. He has also published more than 90 peer reviewed documents. In 1986, he received the BioServ Research Award. In 1992, he received the National Institutes of Health’s Shannon Award, and in 2009 he received the Nutrition and Metabolism Society National Leadership Award.

The Metaboliq Recharge product is designed to target the metabolism of the body in order to help to burn fat, boost lean muscle mass, enhance overall health, provide better energy levels and reshape the body. Moreover, it promises to do all this within a span of 90 days – about three months.

Along with Recharge, the Metaboliq also includes a bar and a shake. That said, this review is focused on the Recharge product. This is designed to be an amino acid blend. According to the product description on the official site, this blend “ignites” the muscle mitochondria. The outcome is boosted efficiency in muscular fat burning, says the website.

Moreover, it claims that excess fat is burned off in an additional span of 2 to 3 hours after having used this product. In essence, this would double the length of time fat burning is enhanced after having used one of the other products in this system, the shake or the bar.

The product is also meant to help to boost the ability to build and repair muscle. As many people struggle with muscle deterioration during weight loss, added support to prevent that from happening can be quite meaningful.

Unfortunately, none of the claims about this product are supported by any cited studies on the official website. While it does look as though it was formulated by a highly qualified medical professional, unless that expert can provide proof that the ingredients can produce the promised results, there really isn’t any reason for a dieter to believe what is being claimed.