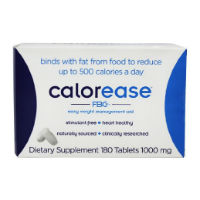 Calorease is a nonprescription weight loss supplement that has been designed to work as a fat blocker in order to assist dieters in being able to reduce their weight with greater ease than they have been experiencing in their various efforts. According to the official website for the product, this formula has been made based on a single ingredient, and it does not include stimulants.

Stimulant free diet pill formulas have a growing following among people whose bodies are sensitive to that type of ingredient as they can receive the help that they need to lose weight, without having to worry about the side effects that stimulants can cause for them.

In the case of Calorease, the product is based on one soluble fiber that it claims has been derived from a type of grain. It does not identify that grain, but has referred to the ingredient as FBCx. Every tablet contains 1 gram of that ingredient, which the manufacturer states is GMO free and healthy for the heart.

The FAQ page on the official website explains that the FBCx in Calorease works by binding to the dietary fat in the stomach. In this way, some of the fat that is consumed as a part of the food that makes up the dieter’s meals will become too large to be absorbed by the body as a part of digestion. Instead, the body will send the excess food fat out with the rest of the body’s waste.

In order to take this product according to the package directions, the dieter will need to take two tablets with every fat-containing meal that is eaten. Therefore, the average dieter will be swallowing six pills per day. That said, dieters can also take these tablets when they eat snacks that contain fat. This could mean that a dieter may end up having to take quite a large number of tablets each day.

The official website says that up to 500 calories can be slashed from a user’s diet each day simply by taking this tablet. Unfortunately, at the time that this review was written, the official website did not cite any studies that would suggest that there are research findings to support the claims that are being made by the manufacturer. As the company has also not actually identified the specific ingredient that makes up the FBCx fiber, it is also not possible to conduct an individual investigation into that substance.