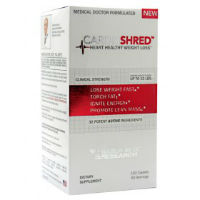 CardiaShred is a non prescription weight loss pill that claims to be able to not only assist a dieter in being able to lose weight, but also promote improved heart health in the process. The primary target market for this product is athletes and bodybuilders and when its official website is examined, it is clear that it is angling toward a male audience. The product also seems to be aiming itself at people who would like to reduce their body weight in order to achieve improved health.

The manufacturer of CardiaShred is a company called Heüer M.D. Research. The CEO behind that company is Harv Heüer, M.D., and he is also the individual who created the pill’s formulation. According to the official website, this product supports weight loss, boosts energy, encourages calorie burning, and yet still enhances lean muscle and contributes to overall heart health. It brags about the fact that it contains 32 active ingredients.

Typically speaking, the majority of products that have over 10 to 15 ingredients already have far too many substances in them. It usually means that the ingredients that make up their formulas are included only to bump up the list, as there couldn’t be enough of anything to be able to produce a powerful enough reaction to make a difference.

That said, at the time that this review was written, a complete list of all 32 active ingredients couldn’t be found on the official website or on any third party site. After searching the major sites mentioning the product, only a partial list of ingredients could be found as some were mentioned here and there. Though this was not found on the official site, some of the ingredients that have been associated with CardiaShred are : caffeine, ciassus quadrangularus, green tea, creatinol-o-phosphate, fish source omega-3, citrus aurantium, and yohimbe.

Right away, it becomes clear that regardless of what all of the rest of the ingredients in this formulation may be, it is primarily based on stimulants. Caffeine, green tea, and citrus aurantium, for example, area all known stimulants, as is yohimbe. Furthermore, while all of those substances are associated with side effects to some degree, two of them are known to produce more severe reactions. Yohimbe has been linked to side effects such as rapid or irregular heartbeat, kidney failure, seizure, and even heart attack. In the case of citrus aurantium, the FDA actually released a warning to consumers cautioning them against the side effects of this powerful stimulant, which contains synephrine.