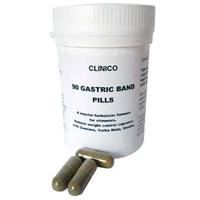 The Clinico Gastric Band Pill is an over the counter supplement pill claiming to be able to offer the same type of results as an increasingly popular medical procedure. Ever since the gastric band procedure was approved by the FDA, there have been diet pill companies trying to profit from it by making claims that they can do in a capsule or tablet what other people are receiving through a medical procedure.

This type of marketing stunt is quite commonplace within this industry and makes it very difficult for dieters to be able to recognize the difference between the pills that are legitimately effective and those simply made so that marketers can bring in fast money while riding a trend.

The Clinico version of this marketing strategy is in the form of a “’crash’ weight loss without hunger” pill. It states that weight loss will start being visible in as few as three days from the first pill a dieter takes.

The official Clinico website claims that it functions as an appetite suppressant. At the time this review was written, the specific page dedicated to this product had an error attached to it, though it does appear that the product is still available as many other pages on the site still refer to it and link to it. This isn’t surprising as the entire website is filled with errors and typos. It doesn’t appear that a great deal of care was taken in order to produce the content of this site.

This product is made and manufactured in the United Kingdom, where it is primarily sold. That said, with the lack of effort made to provide a clearly written and well functioning website, it does cause one to wonder whether or not quality control is high on the company’s list.

This product is meant to be used on its own, or as a part of the brand’s overall “crash” diet, which includes the use of two other diet pills as well as a weight loss CD and a weight loss tea. The CD is a rather unique addition. It is a free gift that comes with the purchase of the three pills that make up the crash diet. It is supposed to use subliminal messages to help a dieter to be able to lose weight more efficiently.

Not surprisingly, there aren’t any studies to support the use of the Clinico Gastric Band Pill, any of the other pills that make up the crash diet, the tea or even the subliminal message CD.