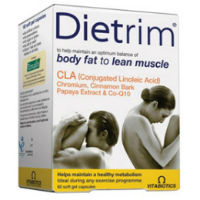 Dietrim is an over the counter diet supplement that is marketed equally to men and women who are seeking to be able to gain greater results from their daily exercises. It is meant for people who are seeking to reduce their weight at a faster and more effective rate.

The manufacturer, Vitabiotics Ltd. has created an official website for Dietrim, where it states that these pills are made up of a formula that provides users with a multi-nutrient experience that will boost energy and fat burning in the body. This is meant to make it easier for dieters who are exercising to lose weight while they do so.

Of course, this is a common type of claim in this industry, so a closer look at the formula is necessary in order to determine whether or not it is appropriate for you to use and whether or not it should be considered safe. This effort should also include a trip to the doctor as there could be reasons beyond whether or not the ingredients have been studied, which should be considered. Allergies, conflicts with medical conditions, and interactions with medications and other supplements could all potentially be avoided by consulting with a physician.

At the time that this review was written, the website identified the ingredients in the formula as being: Conjugated Linoleic Acid (CLA), Chromium, Cinnamon Bark, Papaya Extract and Co-Q10, in addition to a long list of vitamins and minerals as would be seen in a low-dose multivitamin supplement.

Within this formula, the CLA has been studied and has been shown to be quite promising for its effects on helping dieters who are exercising as a part of their efforts with a weight loss boost. However, none of the other ingredients in this formulation have been studied in large scale, reputable research that would allow it to be considered to be safe and proven. In fact, the chromium in this pill is a substance that was actually singled out by the Mayo Clinic in its list of substances that are likely to be safe but that have been inadequately researched in order to have enough evidence to make claims about its benefits with respect to weight loss.

Considering the size of the weight loss industry and the number of products that are available, one that is as under-researched and unproven as Dietrim would be difficult to include among the top recommendations.