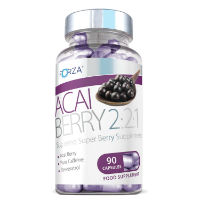 FORZA Brazilian Acai Berry 2:2:1 is one of several nonprescription products sold by Forza Supplements. That manufacturer is a branch of Forza industries and it sells these diet pills both on its own official website as well as through a number of other known third party websites and marketplaces online.

In the case of these diet supplements, the official webpage on the manufacturer’s site markets them as being a formula containing pure acai berry at a powerful strength extract level, that is supported by caffeine and resveratrol.

Although acai berry is associated with one of the largest scams that the diet supplement world has ever seen – with thousands of products containing this substance and not one reputable scientific study (even in the form of a preliminary trial) ever suggesting that it works to create measurable weight loss – Forza cannot necessarily be faulted for its use of the ingredient in their own formula. The reason is that despite the fact that this product is sold within the slimming diet pills category on the website, the company never once claims that the acai berry content in this formula will cause weight loss, will burn fat, or will generate any other result, for that matter.

All that it claims within the FORZA Brazilian Acai Berry 2:2:1 description is that this ingredient is delicious (which is odd because this product is a capsule that is swallowed whole) and that it is a superfood that is high in antioxidants, plant sterols, essential fatty acids, dietary fiber, and important vitamins and minerals. In fact, it doesn’t even claim that the extract within its product actually supplies those features. It only mentions them in a description of what acai berry is, not its extracts.

The product is also described as containing caffeine, which offers stimulation for better physical endurance, performance during workouts, memory, alertness, and concentration. This is well supported by scientific evidence. That said, every capsule contains 200mg of caffeine, which is the same as two relatively strong cups of coffee. As the directions recommend that 2 pills be taken in the morning and 1 be taken later on, that is the same as drinking 4 cups of coffee in one big swallow, and then adding another 2 as a shot, a few hours later. This is certain to cause uncomfortable side effects among many dieters.

While resveratrol is also an ingredient with a dubious history in the weight loss product world, Forza claims only that it is an antioxidant and that it may have possible anti-aging properties.