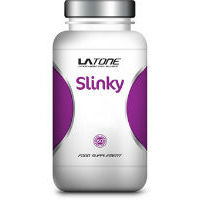 LA Muscle Slinky is a weight loss product that has been designed specifically for women and that is designed and manufactured by the LA Muscle company. That is a well established and relatively well reputed business that makes a range of different dieting, fitness, and bodybuilding products.

This product has recently seen a redesign to make it more appealing to the female consumers that it is targeting. While it was originally a stereotype in pink, its package now features a sleek white and purple design that seems to imply more fitness and natural curve than ultra-feminine hype.

The product description suggests that LA Muscle Slinky will help a woman to be able to burn away stubborn body fat more easily than she would be able to do on her own, and that it also boosts the metabolism and shrinks the appetite, for an added advantage.

The ingredients that make up LA Muscle Slinky are: choline bitartate, inositol, betan, methionine, L-carnitine, chromium piccolinate, and chitosan. The official website for the product also provides the individual amounts in which each ingredient has been included into the formula, which is a very helpful addition.

The official website does cite two studies that have to do with choline, carnitine, and chitosan, but it doesn’t look as though either one of them actually proves that measurable weight loss results from the use of those ingredients. It appears to show that the ingredients have been studied, though not for the specific purpose for which they have been used in these products.

Moreover, when it comes to at least one of those ingredients, chromium, reputable organizations such as the Mayo Clinic have released cautions to consumers that while it is likely that these substances are safe for the average individual to use, they require more research before any real promises can be made about their effectiveness.

For this reason, while it doesn’t look like there is anything in this product that is likely to cause any real harm to a healthy person, it should not be considered to be a proven product, nor should it be considered to have proven ingredients. This makes it a difficult diet pill to recommend.