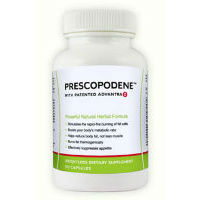 Prescopodene is a nonprescription dieting supplement pill that is meant to help dieters to be able to shed excess weight more quickly and easily. It has an official website that was created by its manufacturer, which is listed under three company names on the website: Drop Down Ltd, Fittiny Health Ltd, and JC Arnica Corp.

The official webpage is clearly focused more on selling the product than on actually informing the consumer. It consists of a single page that opens with an order form and that provides limited supporting information for all of the claims that it makes regarding its ability to help the dieter to lose weight. It uses a very familiar format that is seen quite regularly in the over the counter diet product industry.

It appears to be manufactured in the United Kingdom, as that is the address that is provided at the bottom of this webpage, but it also looks as though it is sold and shipped to Australia, as well.

A few months before this review was written, the website gave the opportunity for the customer to select his or her country so that the information provided would be specific to that individual’s needs. However, over the months, that option appears to have been removed, as has the ability to purchase these pills in anywhere outside of the United Kingdom and Australia. Though they had previously been available in the United States, no reference to that availability could be found on the latest version of the site by the time this review was created.

Another notable change is that while the site had previously mentioned a “clinical trial” on the product on its U.K. site (though not on its U.S. site, which is no longer in existence, as far as can be determined by this reviewer), that mention has been entirely removed. The site now makes claims about accelerated weight loss, increased energy and hunger suppression, and it lists the ingredients, but it does not state that this formula has been proven in any way.

This is important because the ingredients in this product are, in fact, not proven. They include green tea, grape seed extract, vitamin C, quercetin, magnesium, L-tyrosine, hordenine, vitamin B6, octopamine, tyramine, ginger root, and pantothenic acid. This is quite a different formula when compared to what it was only a few months ago. At that time, bitter orange, yerba mate, and other very strong ingredients that are known to cause side effects were included in the formula.

Now, it looks like those harsh substances have been removed in favor of much safer options. Still, it would be difficult to recommend this product based on the new formula, as fewer than half of the ingredients are likely to provide any real help in weight loss and even among those, it is unclear whether enough of them have been used for any measurable effect.