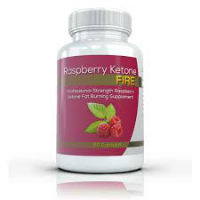 Raspberry Ketone FIRE is a nonprescription diet supplement that is meant to work as a fat burner, antioxidant, metabolism enhancer and even an appetite suppressant. This one product claims to be able to provide that full spectrum of benefits and it says it will do so effectively and safely. The purpose, according to the official website, is to achieve natural weight loss in a healthy way.

The official description of this product says that it works by boosting the rate of lipolysis (which is the breakdown of body fat) by increasing the body’s adinopectin production. Adinopectin is a hormone that occurs naturally within the body and that plays a role in fat breakdown as well as the metabolic rate.

Furthermore, Raspberry Ketone FIRE is supposed to provide the body with antioxidant supplementation. This is believed to enhance immune function while reducing the signs of premature aging. That said, antioxidants have not been scientifically directly linked to weight loss.

The primary ingredient within this formula is, of course, raspberry ketone. That substance has been greatly hyped, particularly after it was mentioned by Dr. Oz. That said, that daytime television host was required to face a federal Senate committee for having made unproven claims about a very large number of supplements such as raspberry ketones.

Raspberry ketones are the substance within the fruit that provides its color as well as its fragrance. They are a natural substance and they contain antioxidants. Again, there has never been a direct connection between the safe use of raspberry ketones in a human study large and reputable enough to be considered acceptable by the medical community. At the moment, the research surrounding the use of this ingredient for weight loss is considered preliminary and inconclusive at best.

To use this product, the package directs users to take one capsule a half hour ahead of every meal. It is to be swallowed whole with a full glass of water. If the user consumes the standard three meals per day, it would mean the daily dose is three capsules on a daily basis.

Due to the fact that there isn’t any medically acceptable proof to support the use of this product or its formula, it is highly recommended that anyone who is considering the use of Raspberry Ketone FIRE should first consult with a licensed doctor. It is unlikely that a reputable doctor will recommend the use of this diet pill.