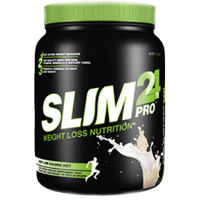 Slim 24 Pro is an over the counter diet supplement that is sold in a form that is an alternative to having to swallow a capsule or a tablet pill. Instead, it was created as a meal replacement shake that is meant to allow dieters to be able to drink this beverage instead of having to eat a typical meal that would contain a far larger number of calories. The concept behind this strategy is to be able to help a dieter to reduce his or her daily caloric intake by slashing back those that are associated with one of the meals of the day, without having to actually skip that meal or lose the energy that it would provide.

The product is also supposed to help a dieter to keep up energy levels and avoid excess hunger. This is not a new concept, as meal replacement shakes have been available for decades and have been surrounded with a certain amount of controversy throughout that entire time.

That said, before deciding that this is or is not a worthwhile product, it is a very good idea to take a closer look at Slim 24 Pro, what it contains, and how much it costs. It is a product that is manufactured by a company based in India, and it promises three different actions to help dieters to be able to lose weight more effectively.

The first benefit is to increase nutrition by providing vitamins and minerals that ensure that it is not the same as actually skipping a meal. The second is that it contains whey protein. The idea is that by providing the dieter with protein, which is digested slowly, it will help to promote a feeling of satisfaction and fullness so that hunger will not be a problem despite the low calorie levels. This is enhanced further as it is meant to be combined with water, milk, or curd, in order to take it. All of those substances are natural appetite suppressants. Finally, its protein also helps to promote the maintenance of lean muscle mass when combined with regular exercise, which boosts the body’s ability to burn fat and calories.

What is unfortunate about Slim 24 Pro is that even though there is an official website, it is desperately lacking in information. The first impression of the site is good, as it has a number of navigational tabs that suggest that there is a complete amount of info provided, but even the “ingredients” tab provides only the nutritional label and does not reveal a single ingredient that makes up this formula.