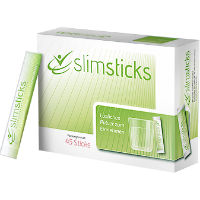 Slimsticks is a form of over the counter weight loss supplement that was created by Inovate Health Inc., in order to assist dieters in being able to overcome their dieting struggles. This way, it is meant to help to make sure that when dieters eat properly and exercise, they will be able to achieve greater results. This, says the official website, is possible through effects such as appetite suppression, as fewer hunger pangs will make it easier to be able to eat less food. Assuming that the dieter is already making smart eating choices, then eating less without hunger should make weight loss simpler to accomplish.

Appetite control is an important feature for many dieters, as hunger is one of the primary reasons that diets can fail. With a smaller appetite, portion sizes can be smaller, the dieter can feel satisfied by a meal for a longer period of time, and it can prevent overeating when it comes to snack time.

Of course, the only way that Slimsticks will actually help a dieter is if it can live up to its appetite suppression promises. Unlike the majority of other products within this category, which are sold in the form of pills such as caplets, capsules, and tablets, this one is a powder that is sold in a little “stick” shaped packet. To use it, it is mixed with about a shot of hot water (1.2 oz, or 35 ml). That solution is mixed with another equivalent amount of water and then is consumed as a very small beverage.

Once that liquid has been consumed, the dieter must then drink an additional two glasses of water, right away. This could present quite a challenge to dieters, particularly as it is required of them at three different occasions during the day (ahead of all three of the largest meals).

The flavors that are available in Slimsticks are double malt, vanilla, and strawberry. Each packet contains 40 calories, so it is important to realize that by the end of the day, 120 calories will already have been added to the total of calories. Though that isn’t all that much, many would argue that the Slimsticks could be replaced by a low calorie snack or two that would be a great deal more satisfying than doing the flavored shots three times a day, followed by six glasses of water, when all is said and done.