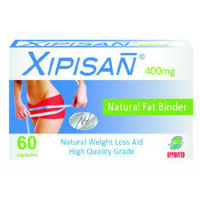 Xipisan, also now known as Rasva, is an over the counter fat binder product that is designed to help people who are attempting to lose weight to do so with greater speed and ease. This type of product has become quite popular over the last few years, particularly as obesity has become a growing problem across the United States and throughout many other western countries.

Though the official website changed its address within the span during which this review was written, the new site shows that the capsule has been designed to aid in digestion and absorb fats from foods that have been consumed in meals, so that they will not be taken into the body and their calories will be negated. The active substance within Xipisan supposedly bonds with some of the fats in food, making them impossible for the body to absorb, but making it easy to pass it with the rest of the body’s waste.

It should be noted that the company behind Xipisan has previously been slapped with a warning from an advertising standards authority for having made false claims regarding this product, great care should be taken before anything about these pills is trusted.

To conduct your own investigation on this product, it is a good idea to start by examining the ingredients. At the time that this review was written, the official site did not list the substances within these pills, saying only that they release an “active ingredient”. They later refer to it as a “vegetal ingredient soluble in water”. This looks like a deliberate effort not to provide the consumer with any information about what that ingredient actually is. The same can be said for the page about Rasva, which is separate, despite the fact that one is a replacement for the other and they are made by the same company.

Another website identified the ingredient as chitin. As this is not confirmed by the manufacturer on the website, it cannot be known for certain that this is, indeed, the substance behind the product. If so, this is not very promising, as the ingredient has never been scientifically proven to actually make any difference to weight loss. While it may, indeed, bind with fat, there is a difference between having this effect and actually producing measurable weight loss. As of yet, that effect has not yet been proven in human clinical trials.